Well I have put off writing this blog for several reasons. First, I injured myself during the beginning of the month and did not want to accept it for a few weeks. Second, I did not want to spend any additional time thinking about how my training was not going as planned. Third, I wanted to avoid thinking about the possibility of running my first of three 200’s while being injured. Now that I have gotten through Bigfoot 200, I feel more comfortable discussing July’s month of training.

During the first month of July, I went to Colorado to do some fastpacking. I was suppose to do four 10 hour days of fastpacking. I was admittedly quite intimidated by this, but I felt better having the good company of my friend, Thomas, who I had met at CTS running camp over Memorial Day Weekend. We decided to go to a small ghost town, Winfield, to camp out and keep our home base there. My coach, Jason, informed me that I could access plenty of trails there. We started our first run around 7pm on Friday. As we climbed over Mount Hope, I was taken back by the view of the stars. A couple of times, we shut off our headlamps and just looked around. On the way back up Mount Hope, I noticed my popliteus tendon (behind the knee)  was not functioning right. I could not seem to pull my heel up as high when I was climbing. I quickly noticed that using my poles made it worse. I was not sure if I was leaning over too much on my poles, so I tried to stand up taller while using them. By the time, we arrived at the top again, we had climbed over 6,000 ft. in about 14 miles.

I tried to be hopeful that this issue would go away during the descent. Unfortunately, things got worse and I resorted to walking for the last hour. As I limped along, I kept thinking about how I was slowing Thomas down, how tired he probably felt, and that he would be able to stay warmer if we were moving faster. The temperature had dropped down to 30 and I had several layers on. I wanted so badly to move faster, but I just could not get my leg to function correctly. The weakness and pain was severe, and I knew that pushing it could just result in a more serious injury. I decided to try to convince Thomas to run back to camp and get warm. We “argued” about this for a while and he was insistent that he was staying with me. Once we finally made it back, we sat in his car for a half an hour trying to warm up. It was after 5am before we went to the tent and we only ended up sleeping a few hours. I wanted to go into Buena Vista for reception and talk to Jason about the next steps.

He suggested that I try walking the next day. I ended up walking six miles at 15 minute mile pace and felt great. I was hopeful that the injury may have miraculously just went away. I decided to try climbing up Huron Peak. I went about three miles up before I had to turn around meet Thomas back at the car. I took it easy climbing and felt strong. While running the last mile though, the pain and weakness came back. The tendon was now very sensitive to the touch and was swollen.

I cut my trip short to Colorado and returned to Austin earlier than expected. For the remainder of July, I would see three different doctors. None of them seemed to fully fix the injury; although all of them recommended I just stop running, and I decided to listen to my coach instead. I tried going out to Bandera to attempt fast packing again, but I did not even get forty miles in before I was limping around again. Despite these obstacles, I kept training and noticed it more during my longer workouts (3+ hour runs).

I managed to still run a couple of 100+ mile weeks in July, typically ran at least 20 hours a week, and kept my weekly elevation gain above 10K a week. I tried to stay positive and focus on the fact that despite the injury, I was still spending a lot more time on my feet than the previous year when I trained for  Bigfoot 200. I also realized that I had only had a couple of weeks last year when I did over 5K ft. of climbing for a week.  I basically started doing over 10K ft. of climbing per week at the end of May and tried to maintain that. Looking back on this, I may have needed some breaks from all of the climbing.

During July, I was getting in some of my climbing on the treadmill. I would put the incline on 13 and power hike for 1-2 hours. I initially dreaded this, but it ended up being a nice break from the oppressive Texas temperatures and humidity! I enjoyed watching some interesting Ted Talks and rocking out to my music. I focused more on strengthening my core and upper body during this time as well. I bought an ab wheel, did different variations of pull-ups, and did push-ups.

The week before Bigfoot, I ran 60 miles and felt strong. It felt amazing to drop my mileage over 40 miles! Most of the time, I dread tapering and want to keep trying to squeeze runs in! This was not the case though, which was a strong indicator to me that I was ready to taper and had worked hard. Since I had more time on my hands, I decided to shift my focus to the mental training during my taper. I meditated more often, read over the course description and mile markers on a consistent-basis, read some inspiring books, prepared my drop bags, and tried to stay positive. Jason was a great source of positive energy and reminded me that training rarely goes exactly as planned. He mentioned to me before the race that I had done over 300 hours of training for this race. Now I just needed to put all of that training to use and hopefully run a little over 80 hours or less! 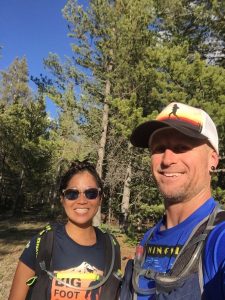 Thomas and I before we start climbing up Mount Hope; you do not want to see what we looked like afterward! 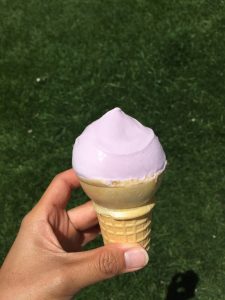 Huckleberry ice cream…because this is what every training plan should include! 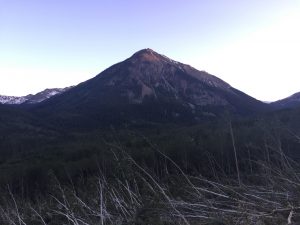 One of the beautiful views before climbing Mount Hope 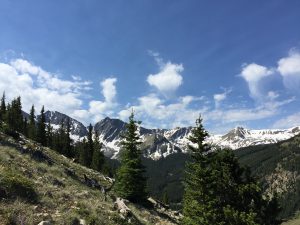 A view while climbing Mount Huron